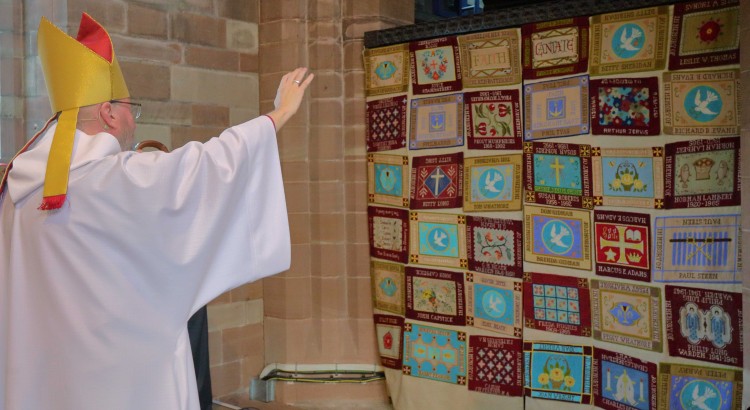 We were delighted to have Bishop Paul worshipping with us today.

He met with our families in the coffee bar after the family service and sampled one of our delicious sausage baps!

At the 11.00am service he blessed the newly installed Memorial curtains.

These curtains have been made by the ladies of the sewing group and feature tapestries which have been made over the years in memory of members of the church .

It was a Sunday morning to remember!

Originally, in the 1980’s and 1990’s, the tapestries were made to cover church kneelers.   Many of them were designed and embroidered by the late Jean Lambert.    Years later, when kneelers were no longer required, they were put into storage.    More recently, it was proposed to recycle these lovely tapestries from the kneelers.  The tapestries were removed, cleaned up and the empty corners embroidered to match the design, by members of the Sewing Group and others.  These tapestries were then made into cushions for the pews, sometimes to be sat on by a relative of the person commemorated on the tapestry!   About 200 cushions were made from a selection of over 300 kneelers.

Like the kneelers before them, the cushions themselves became redundant in 2016, when the church pews were removed and replaced by the present chairs,

Rather than being discarded, it was decided that the cushions should be refilled and upgraded for sale, to raise funds for the church.

Most of the remaining kneelers then had their tapestries removed, and after filling in the corners, were also made up into cushions to sell, except for those tapestries embroidered in memory of deceased members of the church congregation.   As all of these tapestries were made in memory of people who had served in the life of Mossley Hill Church, they form part of the church’s heritage.   It was therefore suggested  that they might be combined to make memorial curtains for the church.

The original stitching of these tapestries was done by many women and, as, inevitably, the stitching varied in tension in each, this resulted in tapestries of different shapes and sizes.    It was therefore quite a challenging task to align them in straight rows.  The outcome is that the rows are far from straight.  No two are the same shape, like the people they represent !

Some tapestries required large turnings, to allow a row of three to fit comfortably across the hanging.  Great care and time was taken in arranging, and re-arranging, the shapes, designs and colours on the hanging. 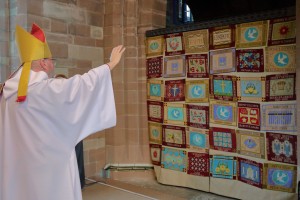 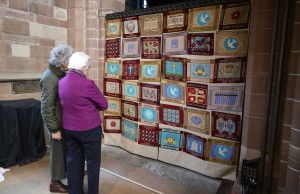 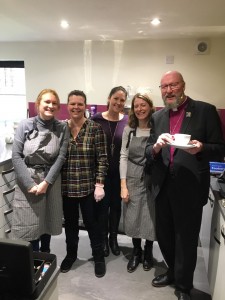 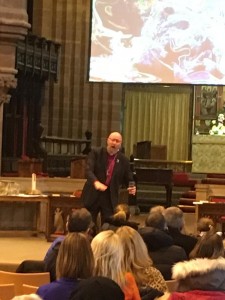 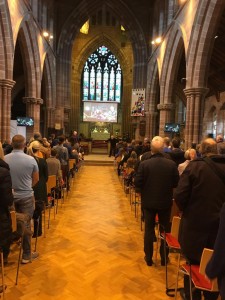 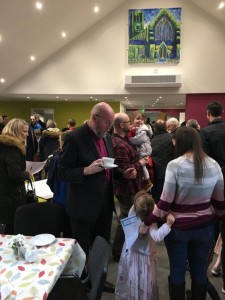 The Church of St Matthew and St James stands at the top of the hill in Rose Lane, Mossley Hill, Liverpool. It is an active Anglican parish church in the deanery of Liverpool South Childwall, the archdeaconry of Liverpool and the diocese of Liverpool. The church is recorded in the National Heritage List for England as a designated Grade II* listed building. The authors of the Buildings of England series describe it as "one of the best Victorian churches in Liverpool"