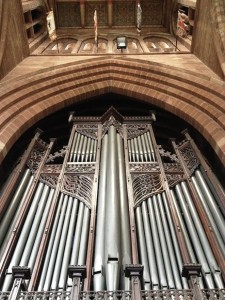 The Organ here in Mossley Hill Church was designed and constructed for the opening of the church in 1874 by ‘Father’ Henry Willis who was at the time, regarded as the greatest English organ builder. In 1874, the organ was slightly smaller than it is today and was hand-blown taking two people who were paid 6d an hour to provide the wind. The stops were arranged in two columns on both sides of the console and were the large rose wood type, stretching the entire height of the console. The action was mechanical and the choir organ un-enclosed.

In 1908 electricity became available to the church. A large organ blowing chamber was built outside the church next to the organ chamber at the north east corner to house the new huge double rise bellows, feeders, electric motor and crank shafts. This apparatus has now been replaced with a belt driven 7½ hp rotary blower. A second smaller booster blower was installed in 1980 at the back of the organ chamber to provide the 18” wind pressure needed for the 8’ Tuba stop. It was, back in 1908, the first organ in the city to be blown by electricity. This was also the first organ in the country that Fernando Germani ever played.

The organ is contained in a free standing architectural organ case designed by Paley & Austin and is situated in a tall organ chamber on the north side of the chancel. Being built on the vertical i.e. most of the departments of the organ are built on top of each other, resulting in the organ actually filling the entire chamber from floor to ceiling. Prior to the 1937 restoration of the organ, the instrument was lower in the chamber and the 1874 console on the floor at ground level behind the choir stalls. Sadly the organ case has always been pushed back behind the arch of the chamber, though it is designed to be forward of the arch.

In the 1937 re-build, the entire organ case, one of the largest by Paley & Austin, with the huge central tower of Violone pipes was raised up within the arch of the chamber. The new Willis III console was also elevated to stand above the choir stalls in a small loft. Before this, the organist would have seen very little once the choir had entered the stalls. At this time the Choir Organ was enclosed and the action was replaced with tubular pneumatics.

In August 1940 three years after the organs first re-build, disaster struck when the church was hit at the West End of the nave by a German bomb. Fortunately, the organ suffered only blast-damage to its casework. The organ was quickly dismantled and stored in Bickerstaffe Village Church, near Ormskirk, its oak case being stored in St. Peter’s, Park Road, until it was re-built into the church in 1945 once the East End of the church had been restored.

In 1964 a new electric action replaced the tubular pneumatic action. The organ was cleaned and overhauled.A new Gedackt rank of pipes was added to the pedal organ giving 16’, 8’, 4’ & 2’ stops.

In 1980/81 the organ was given an extensive re-build by S. Reeves of Liverpool when the action was changed to electro-pneumatic and the tonal scheme of this great instrument completed. A two manual nave console with a number of Pedal, Great and Swell stops was added and situated near the top of the south aisle to enable part of the organ to be played from the nave adding to the organ’s flexibility.

In 1990 a further addition was made to the organ when a rare Willis III Orchestral 8’ French Horn stop was added to the unenclosed Choir department. {This is the only unenclosed French Horn stop in the world }. In 2001 the piston system was extended to 8 pistons per department including a transfer stop enabling the three heavy pressure Swell reeds 16ft, 8ft & 4ft to become Pedal stops on demand thus furthering the already extensive tonal and musical capabilities of the organ.

The organ today is regarded by many as a world class instrument and one of the finest organs in the country. The sound of this instrument and its tonal resources make it, in the hands of an expert player, both an excellent liturgical and recital organ as it possesses the tonal resources needed for inspiring choral and service accompaniment along with playing all periods of organ music.

The Church of St Matthew and St James stands at the top of the hill in Rose Lane, Mossley Hill, Liverpool. It is an active Anglican parish church in the deanery of Liverpool South Childwall, the archdeaconry of Liverpool and the diocese of Liverpool. The church is recorded in the National Heritage List for England as a designated Grade II* listed building. The authors of the Buildings of England series describe it as "one of the best Victorian churches in Liverpool"